Typically, the ACT has been upfront about changes to its test format and content. For example, the ACT test-maker wrote White papers announcing changes to its Reading section whereby it planned to introduce a Paired Passage (started in June 2014) and totally change the ACT essay to incorporate an analysis of three different provided perspectives on an issue. The Essay has changed in scoring twice – from the original 0-12 scale to a 0-36 scale and back to a 0-12 scale. White papers again were written to explain to students, educators, and parents the reasoning behind and the execution of these changes.

However, more recently the ACT has “snuck in” some pretty substantial changes in the Math section and in its Essay prompt directions. We can only theorize that these changes are here to stay, just as the Paired Passage was in Reading and the new 6-Passage format was in Science. It is possible, though, that the new Math content was an anomaly on the December test and that the tests going forward will not reflect this new level of difficulty.

These are some of the new topics in Math that have shown up in the recent tests, with particular emphasis on the content that appeared for the first time in the December 2016 test: 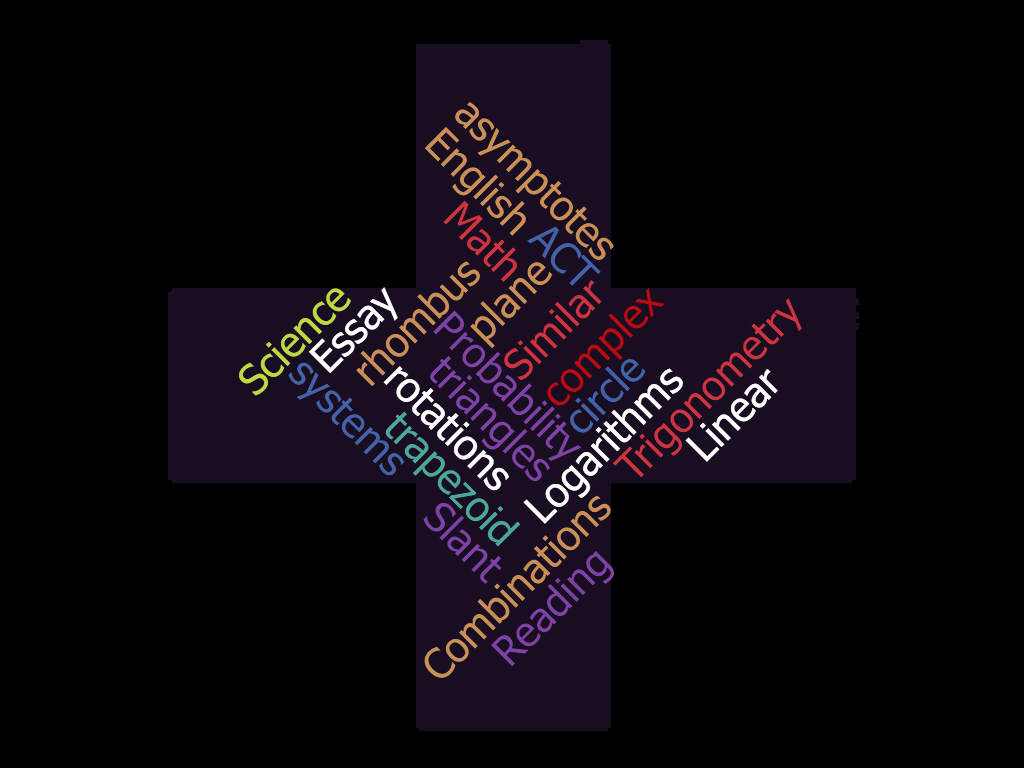 • Solving for the Determinant of a 2x2 matrix (you need to know the formula!)

• Distance between two complex coordinates in the complex plane

• Identifying the greatest standard deviation in patterns of data options

See my previous blog, “Recent Changes to Format of and Increasing Complexity of ACT” written in April 2015.

The one good element of the ACT having “raised the bar” in level of difficulty in Math was that the December ACT Math scale was extremely “lenient”. One of my students who received a 27 score in Math missed 20 questions. On typical prior tests, a 27 score would require no more than 13 misses. It was also possible to miss 5 questions and still receive a 34 score. On typical prior tests, no more than 2 misses would produce a 34 score.

For the ESSAY, the December 2016 test showed the same presentation of a topic that contains tension and provides three different perspectives, but a new set of directions emerged:

“Clearly state your own perspective on the issue and analyze the relationship between your perspective and at least one other perspective.”

Previous directions required a student to discuss all 3 perspectives. This is a favorable change to students, and as such, students should know ahead of time to READ the directions and only include those perspectives that can easily be woven into their own three supporting reasons.

You make it enjoyable and you still take care of to keep it smart.
I can't wait to read much more from you. This is really a terrific site. https://www.imdb.com/user/ur154010535/?ref_=nv_usr_prof_2

Reply Ø³Ø¹Ø± Ø°Ù?Ø¨ Ù?Ù? Ø§Ù?Ù?Ø§Ù?Ù?Ø§
3:40 AM on June 26, 2022
Hi there, I do believe your site might be having web
browser compatibility issues. Whenever I take a look at your blog in Safari, it looks fine however when opening in I.E.,
it's got some overlapping issues. I just wanted to give you a quick heads up!

Besides that, excellent site! https://muckrack.com/gsrjynnarh-gsrjynnarh

proportion we keep in touch more approximately your post on AOL?
I require an expert in this space to solve my
problem. Maybe that's you! Having a look forward to look you. https://ameblo.jp/seocompany677/entry-12750040003.html

Reply Ø§Ø³Ø¹Ø§Ø± Ø§Ù?Ø°Ù?Ø¨ Ø§Ù?Ù?Ù?Ù? Ø¨Ø§Ù?Ù?Ù?Ø±Ù?
6:16 AM on June 26, 2022
Hey There. I discovered your weblog using msn. This is an extremely neatly written article.
I'll be sure to bookmark it and come back to learn extra of your useful
information. Thanks for the post. I will certainly return. https://codepen.io/VHBJNETRYJ/pen/oNEKGYQ

Reply Ø§Ø³Ø¹Ø§Ø± Ø§Ù?Ø°Ù?Ø¨ Ø§Ù?Ù?Ø§Ù?Ù?Ø§
6:16 AM on June 26, 2022
I do believe all of the ideas you have offered for your post.
They are very convincing and will definitely work.
Nonetheless, the posts are very short for beginners.
May you please lengthen them a bit from subsequent time? Thanks for the post. http://justpep.com/story/all/sr-aldhhb-alywm-fy-almanya-sr-aldhhb
-alywm-ref

Reply Ø§Ø³Ø¹Ø§Ø± Ø§Ù?Ø°Ù?Ø¨ Ø§Ù?Ù?Ø§Ù?Ù?Ø§
6:18 AM on June 26, 2022
I do believe all of the ideas you have offered for your post.
They are very convincing and will definitely work.
Nonetheless, the posts are very short for beginners.
May you please lengthen them a bit from subsequent time?

Reply Ø§Ù?Ø°Ù?Ø¨ Ù?Ù? Ø§Ù?Ù?Ø§Ù?Ù?Ø§
6:21 AM on June 26, 2022
Thank you for the auspicious writeup. It in fact was a amusement account it.
Look advanced to more added agreeable from you! However, how could we communicate? https://uotfukltf32.tumblr.com/

Can you recommend any other blogs/websites/forums that deal with the
same topics? Many thanks! https://www.launchora.com/story/1656086978--0